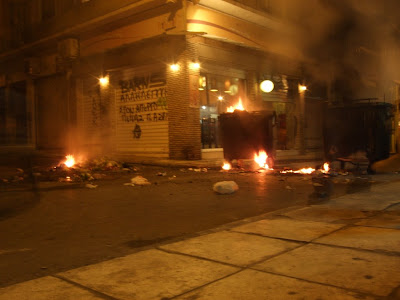 As much as we want it to be, life isn't so much like a movie. A concussion grenade explodes in Kaniggos square in Athens. Roughly 150 anarchists with poles and hammers stand in silence, undaunted by what seems like a premature attack by the police. The pigs, in formation down the street, also stay quiet as if they are questioning the false start in their heads. If it was a Hollywood motion picture, once the blaring noise of the grenade ripped through the peace a furious clash would erupt. But the script wasn't written with box-office sales in mind, this is a demonstration in Athens, Greece, where the standoffs between anarchists and the police are always unbearably too long for my short MTV generated attention span.

After a few minutes that seem to me like decades, comrades nonchalantly turn their back to the police and slowly begin to walk in the opposite direction. Nothing epic initiates our choice to act. About ten comrades wearing motorcycle helmets casually begin destroying the door to what I believe to be a government office, but honestly, if the building doesn't have aMcD on it I have no clue what it actually is. A younger comrade lobs a pole at a surveillance camera placed far above him on another unknown building. Stones fly over his masked head shattering the windows of the same building. Another concussion grenade explodes in the air.

The riot police (here they're called MAT) and the newly formed Delta team of police on their mopeds begin their charge. With the help of the poisonous Israeli tear gas burning my skin, familiar feelings from December arise. Stones fly from our side with the hopes of stopping the police charge, but the cops are too many. Comrades run in two directions; some to the Polytechnic and others towards Exarchia square.

We run - Joe Strummer "Police On My Back" style - towards the Polytechnic. Reminiscent of last September's RNC, one comrade jumps on to a car in the middle of the chase and strikes a pose. We chaotically smash into each other as we all try to squeeze our way through, at the time noticeably small, gates of the asylum. Once inside the no-police zone, the cat and mouse game I learned in December is the default plan of action. We rush out of the gates and hurl molotovs and stones and the cops chase us back into the Polytechnic with tear gas and concussion grenades. The police, being the undignified mess they are, even toss the stones we threw at them back at us.

Meanwhile in Exarchia, flaming dumpsters barricade each cobble stone alley to the square. The street fighting continues well into the night much longer than at the Polytechnic. 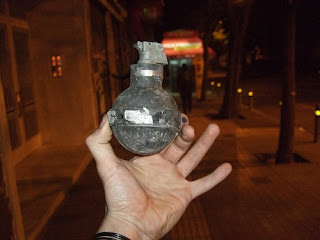 Yesterday, March 9th, about 100 fascists held a demonstration in Omonia square against the recent increase in Greek immigration. The infamous nazi group Golden Dawn took the square, usually frequented by Asian and African immigrants, much like fascists groups in the States that often choose historically black neighborhoods to stage protests. Leftists groups staged a counter protest that begin two hours before the fascists were set to take the square and the anti-racist groups entered a courthouse occupied as a living space by immigrants to help ward off an attack by Golden Dawn.

The police surrounded the fascists demonstration under the pretense of making buffer between the fascists and the immigrants and leftists in the occupied courthouse but it is well known the cops and fascists in Greece have a long history, which dates back to the Junta, of working together. The most recent example of their partnership was seen in December when undercover policeman and Golden Dawn attacked several protesters and insurgents with knives during the uprising.

At roughly 7 pm, a clash ensued between the leftists and immigrants and the fascists and police. As fascists hurled stones at the courthouse and those standing outside to protect it, iron bars and concrete slabs came raining down from the courthouse. Road flares exploded over head as the fight began. Injuries and arrests occurred but the exact numbers are not yet confirmed.

In recent years, Greece, due to its location, has become the first location for immigrants arriving to Europe and human trafficking on the Greek ports is rampant. Beatings and murders of immigrants by the police and fascists are frequent in Athens. Fascists are known to stab undocumented workers at their makeshift street stands, a common source of employment for immigrants unable to work legally. Weekly, immigrants are forced to register their papers at the immigration offices where they are met by attacks from the police.

Attacks on anarchists are also common, two squats in Athens have been torched by fascists in the past months. In last year's fascists demonstration, two anarchists were stabbed as the riot policed attacked comrades with fascists stabbing at them with knives and axes behind the police line. Due to the allegiance between the cops and the fascists, it was expected that the anarchist march would not make it to Omonia square from Kaniggos square. 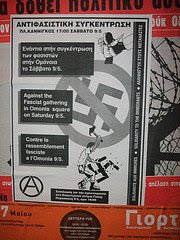 If yesterday's clashes would have occurred in the States, I'm certain that the anarchist choros (meaning "mileu" literally translated as "the space") would be talking about it for years to come. But in Greek standards, the street fights were minor, very little property was destroyed and, sadly, the anarchist contingent never made it to Omonia square to confront the fascist as planned. Among the comrades, frustration and disappointment with yesterday's events is the consensus. In the States, such a widespread dissatisfaction would doubtlessly lead to name-calling and finger-pointing but this wont be the case here; there is no Greek anarchist message board to talk shit. Instead of specific people, poor planning takes the blame. Although fascists and revolutionaries have a long history of conflict, the most memorable being the Greek civil war, large anti-fa actions like yesterday are relatively new. The fascists who are small in numbers compared to left-wing or revolutionary groups often act in small groups and rarely call demonstrations that would exhibit their size.

but you have to give some kind of id (wtf ?)
responding to the photos page -- the street signs were changed by people who hang out there