On prison island it is well known the new repressive technology being implemented to control the submissive population, from wide scale CCTV networks to specialist armed terror cops to facial recognition software to internet monitoring the list goes on.

Now the cops have been give a brand new ‘drone unit’ in the counties of Cornwall, Devon and Dorset. All three county cop forces started testing the drones back in 2015, but now it has become a permanent unit. It is claimed in local authority propaganda that they will be used to find missing persons and in counter-terrorism operations, but already video evidence from the six drone unit has been used in courts to convict uncontrollables for a variety of claims including firearms.

By 2018 the cop forces will have 40 trained cops and 18 drones in the unit. The drones are fitted with zoom cameras and thermal imaging. They are seen as a cheaper alternative to cop helicopters. Further uses of the drones are calimed to be from drug and road searching, as well as monitoring 600 miles (900km) of coastline and extensive woodlands to help combat wildlife crime. The drones are now being trialed by Merseyside, Gwent and Kent cop forces as the units are being spread across the whole of prison island. 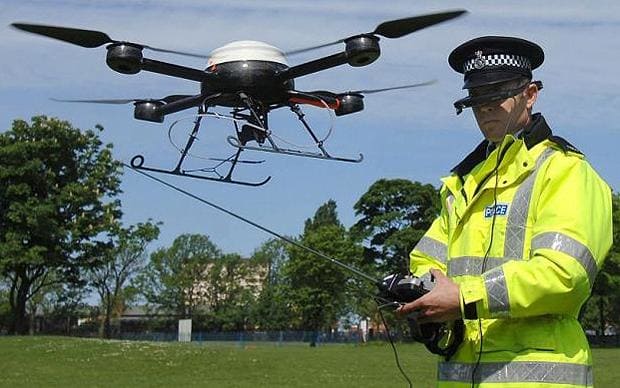 No one should be fooled by the cops into believing that the new ‘drone units’ are of benefit to them. In an ever increasing rise of repressive technology being used in prison island in the name of crime prevention and countering terrorism there should be no illusions, that the drones will be used to keep tighter inexpensive control of its populace, expect one these mechanical insects to be hovering above you whenever you contemplate anything illegal, at the next protest or riot or rebelling against the system of control.

This was the real intention of drones, to keep us all under control, Orwell eat your heart out!