The Federation of Garment Workers Union-Myanmar (FGWM) is a very militant federation of grassroots and class unions that brings together thousands of workers in the garment industry in Myanmar. The International Confederation of Labour (ICL) met their delegates at the recent Conference of Garment Unions from Southeast Asia in Sri Lanka and both organisations have been in touch and exchanging information since then.

FGWM is comprised of 20 factory-level independent and grassroots unions. One of their unions, in a company called Myan Mode, has recently faced negative employer response regarding the Covid-19 situation and they requested solidarity from ICL and its sections to support their workers. 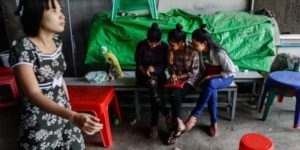 Myan Mode factory was operating with a workforce of 1274 workers. The factory supplies Zara, Mango and C&A brands. Before 10 am on March 28, the factory asked the workers at the factory to work 4 hours overtime, but the workers refused. The union immediately went up to the management and tried to negotiate to leave work at the normal time. While the union was negotiating, the manager announced the workers that the factory was reducing the workforce in 571 workers due to not enough raw materials being supplied, because of Covid-19. 520 workers out of this 571 are union reps or members. Obviously, the employer is violating the country’s law (which requires a month notice to reduce the workforce) and most importantly, aims to destroy the union. Since that afternoon, workers have been on strike in front of the factory demanding the reinstatement and opposing union busting by the employer.

A round of negotiations to resolve the conflict was scheduled with the factory owner for March 31 at 11:30 Myanmar time. The 30th, our comrades from FGWM requested ICL members to show their support by sending pictures of themselves holding solidarity messages. They were aware of the lockdown and quarantine situation in many countries and of the tight deadline, but still asked ICL members to send some pictures to show the factory management that they had international support, which they do. As they said in their request: “We want to use that as a potential leverage against the owner telling him that “we have our union brothers and sisters in Europe and the US where you supply your products” and where the brands are located”.

Despite the tight deadline and the current situation, the response was overwhelming. Many more pictures were received that were expected or requested, together with solidarity messages. The federation and the Myan Mode union send out their thanks to everyone who showed their solidarity and support regardless of the short notice.

Our latest update on the situation is that the conflict continues. There will be more negotiation rounds, workers are holding marches and rallies and planning to escalate their actions. ICL wishes our fellow workers in Myanmar the best in their struggle to stop union busting and defend their jobs.

The quick and amazing reaction of ICL members, friends and contacts shows that our support can travel across the borders in any circumstance. Thanks to all of you who sent messages and pictures, forwarded the request to your contacts and unions and supported this call in any other way.

The Liaison Committee of ICL.