Action and statement of solidarity with Abtin Parsa, Fran Molero and imprisoned Belarusian Anarchists and Antifascists

από Anarchists from germany and netherlands

On the night of the 1st of December, several messages in solidarity with different anarchists and anti-fascists were spray painted around walls in Germany and The Netherlands. The messages read “Free them all”, “Solidarity with Belarusian Anarchists”, “Free Fran Molero”, “Let Abtin Parsa Stay” and "Molero Libertad 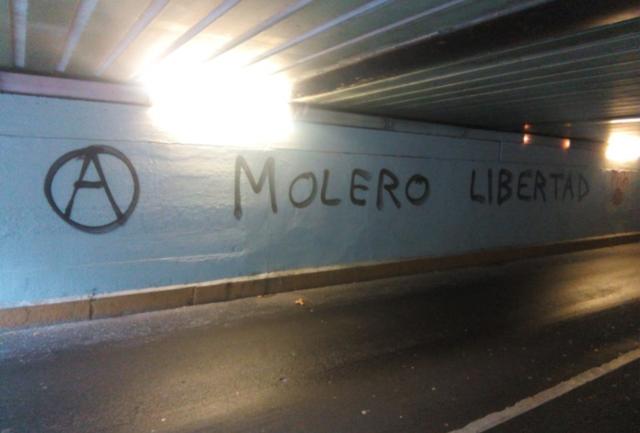 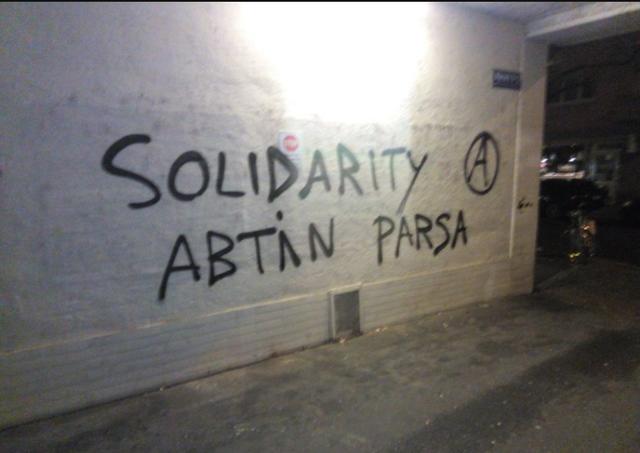 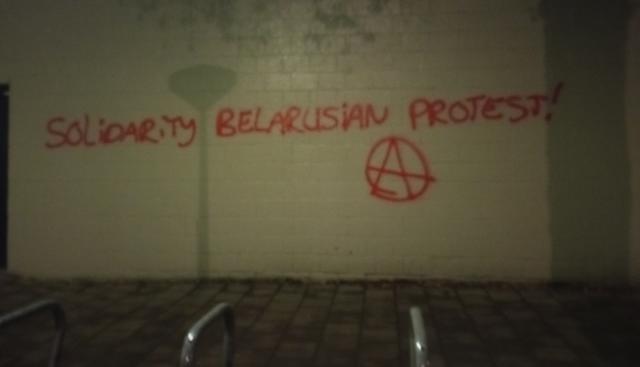 On the night of the 1st of December, several messages in solidarity with different anarchists and anti-fascists were spray painted around walls in Germany and The Netherlands. The messages read “Free them all”, “Solidarity with Belarusian Anarchists”, “Free Fran Molero”, “Let Abtin Parsa Stay” and "Molero Libertad"

Abtin Parsa is a revolutionary anarchist and former political prisoner from Iran. He was arrested in Iran at age 16 in his high school for giving a speech speaking out against religion and the state. After spending a year and a half in prison in Iran he fled to Greece where he joined the anarchist struggle. He joined the resistance movement in Greece, and began to struggle against the systematic oppression perpetrated by the Greek state against society, especially immigrants. During this struggle he was arrested and even tortured several times by the Greek state. The Greek state revoked his political asylum and he escaped Greece and applied for political asylum in the Netherlands. A few weeks ago, the Dutch state rejected his political asylum application and intends to extradite him to Greece. If Abtin Parsa is extradited to Greece, he may end up to Greek prisons or even extradited from Greece to the Islamic state of Iran, where his life will no doubt be in serious danger. Abtin Parsa must stay in the Netherlands! We demand the granting of Dutch political asylum and we oppose his extradition to Greece. (More on: https://www.vrijebond.org/open-oproep-voor-protest-bijeenkomst-in-solida...)

Francisco Molero is a Spanish anti-fascist. He has been in prison for two years on charges of assault on authority. He was arrested in Madrid in 2013 during a demonstration against the so-called "Gag Law", which resulted in 23 people injured and seven arrested. He was sentenced to 5 years in prison and a fine of 16,000 euros, in a trial plagued by irregularities in which the only evidence against him was the testimony of the police.More info: https://www.elsaltodiario.com/represion/sindicalista-sat-francisco-moler...

During the uprising in Belarus, many of our comrades ended up in prison. Now at least 10 anarchists and antifascists are serving administrative arrests. In addition, 10 anarchists and 4 anti-fascists are waiting for criminal courts, punishment for some of them reaches 20 years in prison.From: (https://www.agamsterdam.org/call-for-solidarity-with-belarus-demo/)

Our Solidarity is not Symbolic

Our solidarity is not symbolic. The best way to honour the sacrifices made by our comrades is to read their words closely and to act on their ideas - our ideas- as anarchists and antifascists. Their struggle is our struggle. Our power lies in autonomy and decentralisation – to act- without leaders and authority. It is not possible to confront capitalism without assuming the need to transmute each of our bonds with society. Every action must serve to extend the networks of solidarity, to contribute to the construction of a society based on mutual aid, to destroy all authority based on violence.

Our solidarity relies on fighting with rage and love in our hearts for a world without cages and borders. One that is both possible and necessary. Let our solidarity speak through our actions.

Or in the words of Abtin Parsa “at the moment, solidarity means attack and we need a movement of solidarities that have anti-capitalism and anti-state characteristics” …. “We must attack the interests of state and capitalism in solidarity with migrants.” (from: https://www.indymedia.nl/node/48325)

Anarchists from germany and netherlands