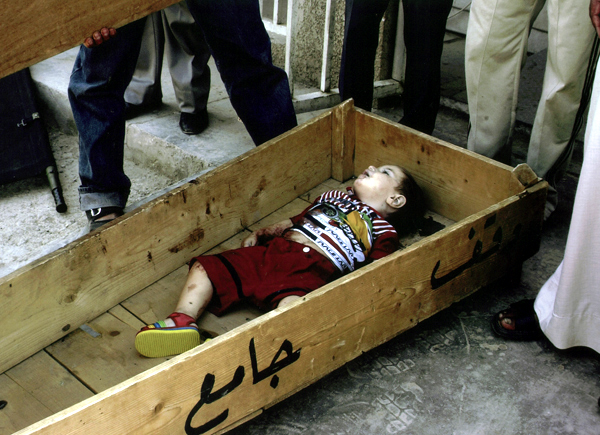 BAGHDAD -- -- A car bomb blew up in the capital's Shiite Muslim neighborhood of Sadr City on Thursday, killing at least four people, as a new survey suggested that the civilian death toll from the war could be more than 1 million.

The figure from ORB, a British polling agency that has conducted several surveys in Iraq, followed statements this week from the U.S. military defending itself against accusations it was trying to play down Iraqi deaths to make its strategy appear successful.

The military has said civilian deaths from sectarian violence have fallen more than 55% since President Bush sent an additional 28,500 troops to Iraq this year, but it does not provide specific numbers.

According to the ORB poll, a survey of 1,461 adults suggested that the total number slain during more than four years of war was more than 1.2 million.

ORB said it drew its conclusion from responses to the question about those living under one roof: "How many members of your household, if any, have died as a result of the conflict in Iraq since 2003?"

There was no way to verify the number, because the government does not provide a full count of civilian deaths. Neither does the U.S. military.

Both, however, say that independent organizations greatly exaggerate estimates of civilian casualties.

ORB said its poll had a margin of error of 2.4%. According to its findings, nearly one in two households in Baghdad had lost at least one member to war- related violence, and 22% of households nationwide had suffered at least one death. It said 48% of the victims were shot to death and 20% died as a result of car bombs, with other explosions and military bombardments blamed for most of the other fatalities.

The survey was conducted last month.

It was the highest estimate given so far of civilian deaths in Iraq. Last year, a study in the medical journal Lancet put the number at 654,965, which Iraq's government has dismissed as "ridiculous."

The car bomb in Sadr City injured at least 10 people and set fire to several shops. Also Thursday, police said they had found the bodies of nine people believed to be victims of sectarian killings across the capital.

In its latest salvo at Iran, the U.S. military accused the Islamic Republic of providing the 240-millimeter rocket that earlier this week slammed into Camp Victory, the sprawling base that houses the U.S. Army headquarters. The attack on the base near Baghdad's airport injured 11 soldiers and killed one "third-country national."

At a news conference, a military spokesman, Army Brig. Gen. Kevin Bergner, displayed a chunk of metal that he said had come from the rocket. Asked how he could be sure it was of Iranian origin, Bergner said its color and markings were unique to rockets from Iran.