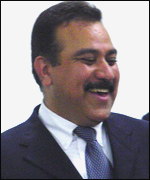 SECRETARY ALBRIGHT: I was pleased to meet today with a
distinguished and diverse delegation of Iraqis who are here in
New York to advocate the interests of the Iraqi people during the
United Nations General Assembly. We hear so many around the
world expressing compassion for the Iraqi people. Anyone who
really cares about the Iraqi people, and the recovery of their
once-great country, must listen to free Iraqis like these who
bravely speak the truth. It is sad that some, instead, listen
only to representatives of the regime that oppresses the Iraqis,
that misrepresents them, and that threatens and insults their
neighbors.

The United States listens carefully to the Iraqi advocates.
Today, they proposed ways to hold the Baghdad regime accountable
to this world body, and to the people of Iraq. They offered
ideas to ease Iraqi suffering, while making the sanctions work
better against the regime that defies its international legal
obligations. And they again emphasized the central importance of
Security Council Resolution 688, which condemned Baghdad,s
oppression of its own people as a threat to regional stability.

This group includes real heroes. The courage of one of these
Iraqi visitors is particularly exemplary. General Najeebal-Salihi refused to submit to the unspeakable blackmail of the
Baghdad regime, directed not only at him, but also at his family,
because he has written and spoken the truth about the causes of
Iraq,s humiliation. He stands for the millions of Iraqis who
have sacrificed beyond human comprehension as they refuse to
submit to oppression.

The United States salutes the courage of Iraqis everywhere in the
Opposition. I wish them success in presenting to the world the
true hopes and needs of the Iraqi people, and ultimately in
bringing democracy and the rule of law to their country.

The government has reversed a previous order banning former army officers from joining the new army.

Prime Minister Nouri al-Maliki has instructed the Ministry of Defense to accept applications from former army officers. The move comes following a pledge he made earlier this month to repair damage to the country’s security due to a U.S.’s disbanding of the former army. But Maliki’s instructions only cover officers up to the rank of major. Officers with higher ranks are not covered.

The Ministry of Defense is working to implement Maliki’s orders and has called on the officers to report to army volunteer centers. The fate of the members of the former army has become a sticky issue in Iraq and the government is apparently willing to solve as part of a national reconciliation drive. Maliki has set up a new committee under Najeeb al-Salihi to present ideas on how to settle the issue.

There are currently about 7,000 volunteers who were one members of the former army. But most of these were selected under a vetting system which leaned towards sectarian affiliation rather than talent and loyalty to the country. Under the new guidelines the number is expected to double.

Iraq was on Wednesday rocked by powerful car and suicide bombings that killed 28 people, bringing the toll in a three-day surge of bloodletting across the country to about 70, officials said.

"There was an increase in violence in the past few days," US military spokesman Major General Kevin Bergner told reporters in Baghdad. "We had been expecting it."

In one of Wednesday's attacks, a suicide bomber smashed his car into the house of a tribal sheikh who had been supporting police in the fight against Al-Qaeda and detonated his explosives, killing eight people and wounding 10, an official said. The sheikh was among those wounded.

The attack in the town of Sinjar, west of the main northern city of Mosul, targeted the home of Sheikh Kanan al-Juhaimur, a Sunni tribal leader, according to the mayor of the town, Dakheel Qasim Hassu.

Hassu said Juhaimur had recently thrown his support behind police in their fight against Al-Qaeda in the volatile district.

The attack comes almost two weeks after the killing in a car bomb attack in Anbar province of top Sunni Sheikh Abdul Sattar Abu Reesha, who had spearheaded a fight against Al-Qaeda through his Anbar Awakening Conference coalition of tribal leaders in the vast desert province.

The Iraqi authorities and US military have been trying to duplicate the Anbar Awakening process in other parts of the country but on Monday another initiative, at Shifta near the restive city of Baquba north of Baghdad, was targeted by a suicide bomber who struck during a reconciliation meeting.

Police said 28 people were killed and 34 wounded in the attack, which took place in a mosque during a meeting of local leaders of the Shiite Mahdi Army militia and the rival Sunni insurgent group, the Brigades of the 1920 Revolution.

"Two car bombs exploded within seconds of each other near the Shargat Hospital in the middle of a market and the other near a car parking killing seven people and injuring scores of others," said police captain Abdul Hadi Rigab.

Five people were killed and more than 40 people injured in three bombings in Mosul, where the authorities imposed a curfew, security officials said.

In Kirkuk, police captain Jassim Abdullah said one person had died in roadside bomb attack on a police patrol, while a civilian was killed and three others were wounded in a second blast in the centre of the northern oil city.

In Baquba, north of Baghdad, five people -- all members of one family -- were shot dead when gunmen entered their home before dawn and sprayed them with bullets, security officials said.

The fresh surge of violence follows a period of relative calm that had followed the bloody start to the Muslim holy month of Ramadan on September 13, when Abu Reesha was killed.

Al-Qaeda in Iraq, an affiliate of Osama bin Laden's jihadi network, claimed the killing and promised a new offensive during Ramadan.

Senior US military commanders say that levels of violence during Ramadan, which since the US-led invasion of 2003 has become a period of increased bloodletting, will provide an indicator as to how soon American troop levels in Iraq can be reduced.


BAGHDAD - A U.S soldier was killed during a small-arms fire attack while conducting combat operations in eastern Baghdad on Tuesday, the U.S. military said.
SHIRQAT - Two car bombs killed seven people and wounded five in the town of Shirqat, 300 km (190 miles) north of Baghdad, police said. The first one targeted a police patrol in a crowded market and the second exploded near a police station.